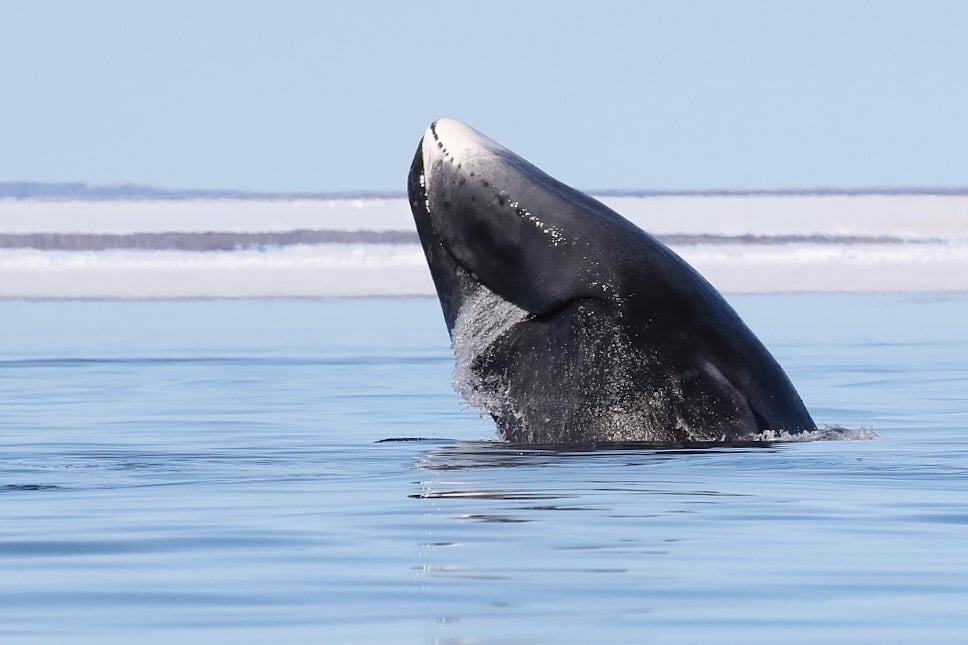 In August 2012, photographers on Arctic Kingdom’s Polar Bears & Glaciers of Baffin Island discovered a new bowhead whale molting location while scouting by boat a new area just south of Qikiqtarjuaq, Nunavut. Accompanied by Graham Dickson, Arctic Kingdom’s Founder and Chief Expedition Leader, photographers witnessed the act of bowhead whales rubbing their 18 m (60 ft) long bodies on the rocks on the ocean floor to scrape off their skin – a process known as molting.

“There must have been over 20 bowhead whales!”, exclaimed Graham Dickson.

Also making this experience unique was the water clarity and pieces of bowhead whale skin found floating in the water. These are both things that have never been seen before, and the crystal-clear water allowed incredible underwater photography of bowhead whales. 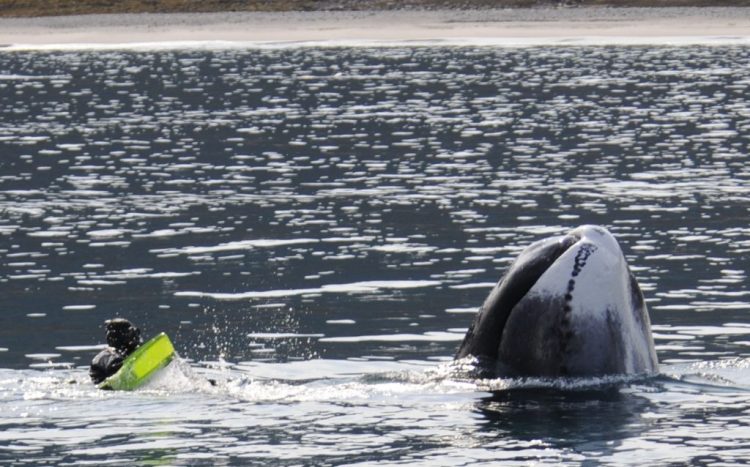 Todd Mintz, a Canadian photographer, couldn’t resist putting on his drysuit and floating in the water to witness the behavior. Equipped with a GoPro camera, he dove in and experienced incredible sightings of the 100-ton whale approach within 5 feet of him. He also managed to retrieve some bowhead whale skin that was floating in the water.

Mintz has travelled with Arctic Kingdom many times since 2010, photographing wildlife including polar bears, muskox and narwhal. This was the first time he experienced a wildlife encounter of this nature.

“That was one of the most incredible experiences I have ever had. I had no idea what he was going to do. I was frozen on the spot, and only remembered to take some pictures at the last second. That never happens,” Mintz recalls of the experience. 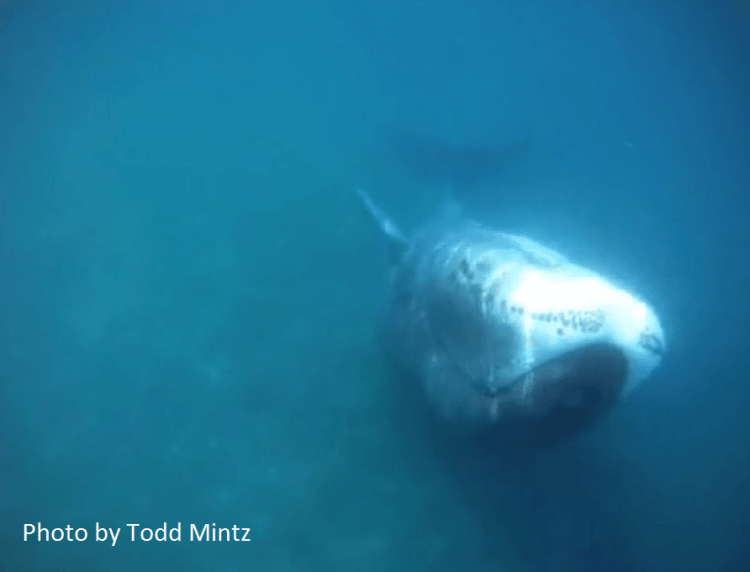 At the time Dickson and the photographers on board knew they were witnessing something special.

Molting – the periodic shedding of skin and pelt, which is then replaced by new growth – has been observed and well-studied for seals and sea lions. Whales, porpoises and dolphins are generally thought to continuously shed and replace their epidermis, except for Arctic whales that experience significant changes in environmental conditions seasonally. While the molting patterns of beluga whales are wellknown, little is known about this phenomena for bowhead whales. 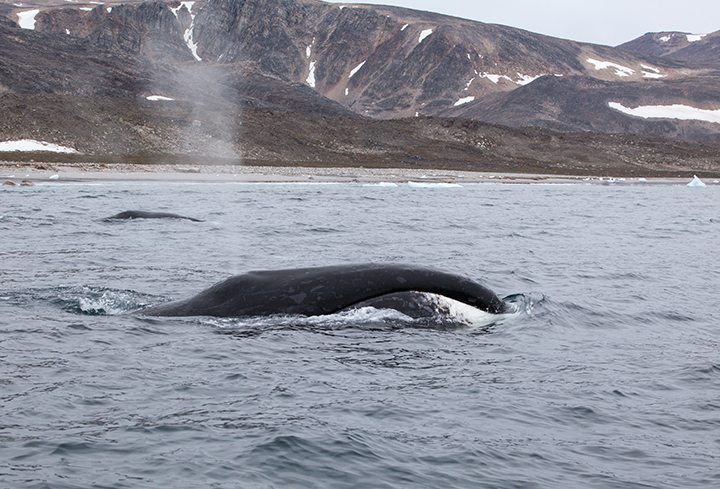 To verify what we saw, we consulted with the Canadian expert in bowhead whales – retired bowhead whale ecologist and researcher Kerry Finley. While he hasn’t been to this location near Qikiqtarjuaq, Finley has studied the Baffin Island bowhead whales since 1983 along the coast of Baffin Island, mainly a few hundred kilometers to the north in Isabella Bay.

After discussing the behavior of the bowhead whales, and reviewing photos and videos of the trip, he confirmed our suspicions. He also commented that witnessing both, molting and the excess skin left in the water is a rare sighting for even the most knowledgeable experts.

“Your photographers captured just the sort of image we tried so many years to obtain,” said Finley. “I had always hoped to one day capture the molting behaviour that I suspected was taking place but to no avail. It is interesting that you actually saw pieces of skin which I never saw. It is definitely molting behavior that you saw”.

“What you have found,” he continued, “could very well be a special place for bowhead whale observation”.

We are not the first ones to have discovered the bowhead whales and where they go to molt. Inuit have known about them for decades. Upon returning to the Arctic Kingdom base camp that evening we described to a local Inuit elder where we went and what we saw. His response was simple, “Yes, you went to the place where the bowhead whales go”.

We often return to the same “place where the bowhead whales go” in August on Polar Bears & Glaciers of Baffin Island. While we don’t see this bowhead whale molting behaviour every year, we have observed it several times to the delight of our guests. 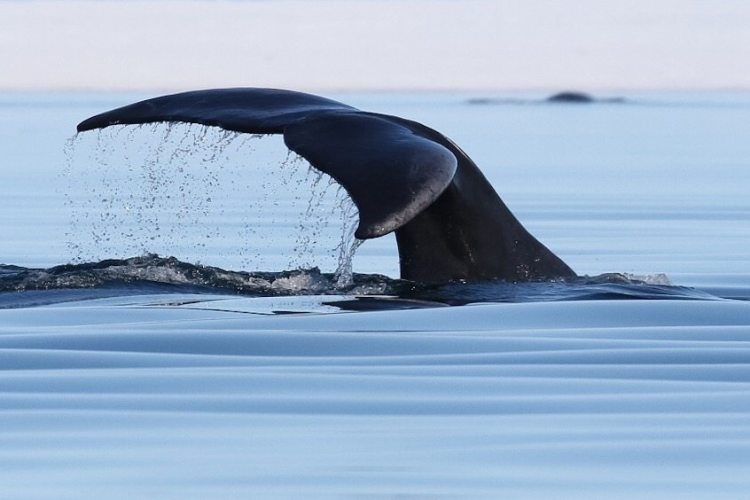 Want to visit this bowhead whale molting location and get a chance to see this behaviour for yourself?

Kings of the Arctic

Explore the floe edge and spectacular environment of Foxe Basin by boat in search of bowhead and other wildlife including polar bears and walrus in July. Learn more about this Arctic Safari here.

Join us on Polar Bears & Glaciers of Baffin Island this August. Contact us today to book your adventure. 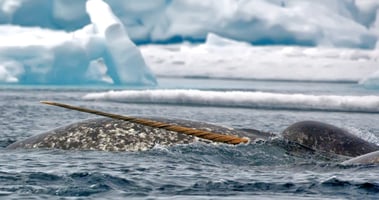 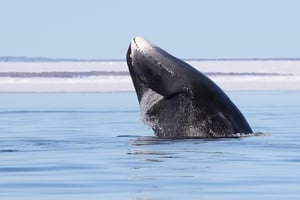 Whale watching is one of the most popular experiences travellers want to cross off their bucket... 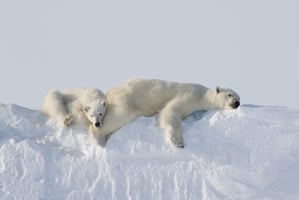 The raw, untouched beauty of the Canadian Arctic provides incredible photography opportunities in...