Get To Know the Eastern Gateway of the Northwest Passage

Have you dreamed of visiting the Northwest Passage? How much do you really know about the wildlife and destinations?

Join us as we explore some of the most interesting features that make up the eastern gateway of the Northwest Passage.

Sailing through this breathtaking landscape on someone else’s itinerary just isn’t enough. With towering red cliffs, ancient glaciers, and relics of Arctic exploration, a customizable journey is the best way to explore the Northwest Passage. Learn about some of the most exciting and interesting spots along the way. 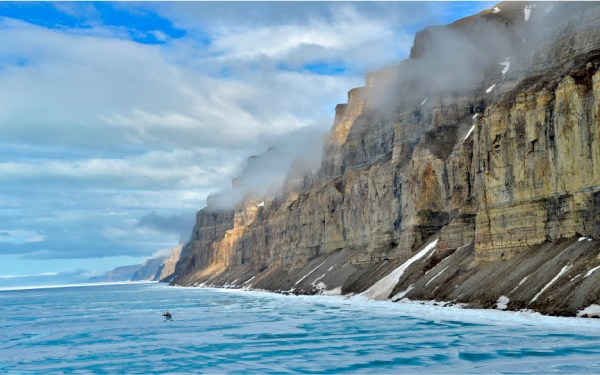 This Arctic body of water separates Greenland from the Canadian Arctic and marks the eastern entrance to the Northwest Passage.

Before Sir John Franklin’s Expedition entered the Northwest Passage their ships were spotted in Baffin Bay by a Scandinavian whaling ship. No one could have guessed that this would be the last known European siting of Franklin’s expedition. 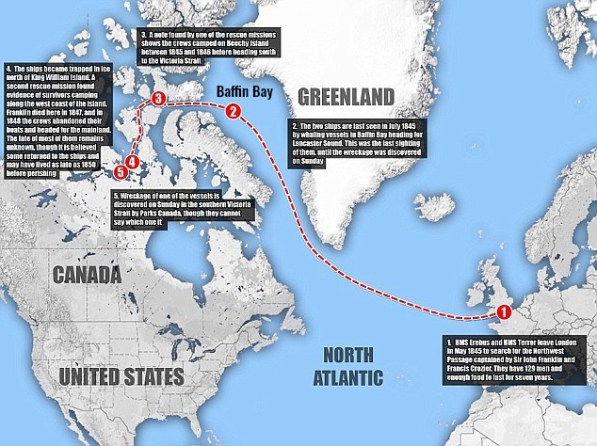 The waters of Baffin Bay are surprisingly full of marine life! Throughout the winter a majority of the world’s narwhal population. As the ice starts to thaw in the Canadian Arctic, about 75% of narwhal will migrate into the Northwest Passage looking for their summer feeding areas.

Now, like Franklin’s Expedition and those narwhal, let’s travel into the Northwest Passage with our next stop, Lancaster Sound.

This water channel is the first main route through the Northwest Passage, but this area offers something truly special. Did you know that it is a world-renowned wildlife hub?

You can find narwhal swimming past shorelines probing for openings in the ice. Spot walrus in groups hauled up onto ice floes throughout this waterway. Without a doubt, you will spot a whole lot of beautiful arctic and migratory birds fill the sky and bobbing on the water’s surface with brightly coloured feathers. 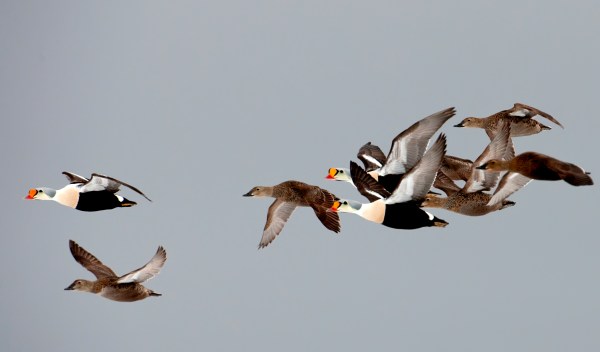 In fact, it is such an active wildlife hub that it is becoming an enormous marine conservation area, called the Tallurutiup Imanga National Marine Conservation Area. This is a region that too many natural resource companies would like to control but this new Conservation Area makes it a wildlife paradise! 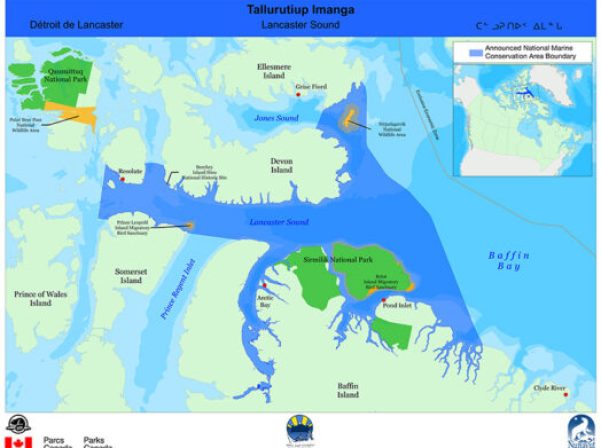 Speaking of wildlife havens and protected areas, our next destination is Bylot Island.

Bylot Island, a cornerstone of southern Lancaster Sound and across from the community of Pond Inlet is Bylot Island. Like the Pillars of Hercules, this island’s towering peaks are a reminder of the breathtaking landscape of the Northwest Passage.

The island is a major portion of Sirmilik National Park and home to Bylot Island Migratory Bird Sanctuary. It’s steep cliffs make the perfect destination for birds travelling from all over the planet to safely nest each spring and summer. Thousands of unique and stunning birds can be found with small group trips to the island.

With Eclipse Sound, the water channel between Bylot Island and Baffin Island, you can find all kinds of iconic Arctic animals like polar bears, narwhals, belugas, bowhead whales, harp and ringed seals, and more! 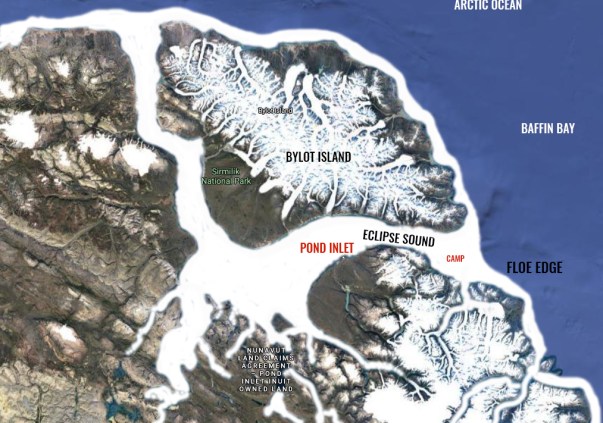 It’s the floe edge that makes this area such a diverse wildlife hub. During the frozen seasons, Eclipse Sound freezes over making a platform for wildlife to travel over and floe edges form at the mouths of the channel. With our small group land-based safaris you can stand on the frozen sea-ice and watch or photograph bucket list whales and birds. 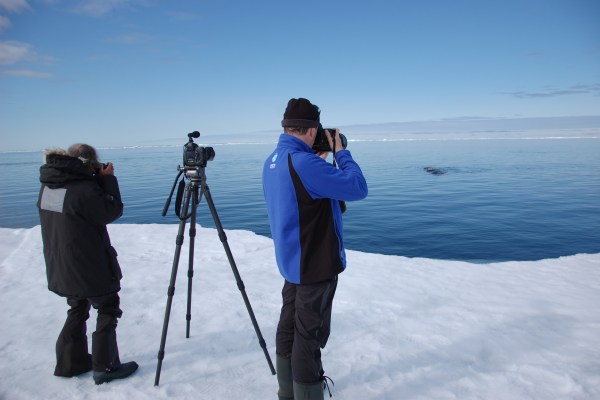 Speaking of floe edges and islands, the northern gateway to the Northwest Passage is Devon Island. Surrounding the island are those same migrating narwhals and belugas or the bowheads and walruses who spend the whole year in these waters.

Wandering the land you may find herds of muskox, Arctic fox and Arctic hares, and of course Arctic wolves and polar bear. 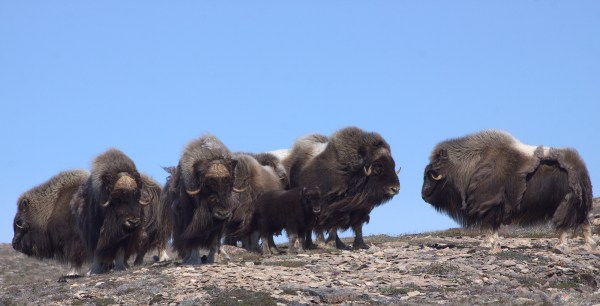 Like Bylot Island directly to its south, Devon Island’s shoreline cliffs stretch out of Lancaster Sound like a northern Pillar of Hercules. There is even an enormous glacier on the western side of the island making it a top Arctic highlight.

Devon is a stunning and exotic scenery with extraordinary red cliffs that resemble Arctic cliffs of Dover. Explore the rolling craters of red rock creates a landscape that looks like Mars. In fact, NASA chose Haughton’s Crater for its Mars training and research site. So, it is truly otherworldly to visit! 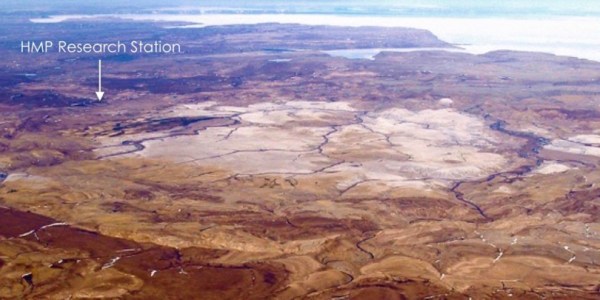 Let’s get back to history and Franklin’s expedition. When we talk about the Northwest Passage it’s nearly impossible to avoid discussing the tragic story of Sir John Franklin’s Expedition. After years without even a sign of what happened to the lost trip, finally a major clue was discovered on a small island off the southwestern corner of Devon Island. 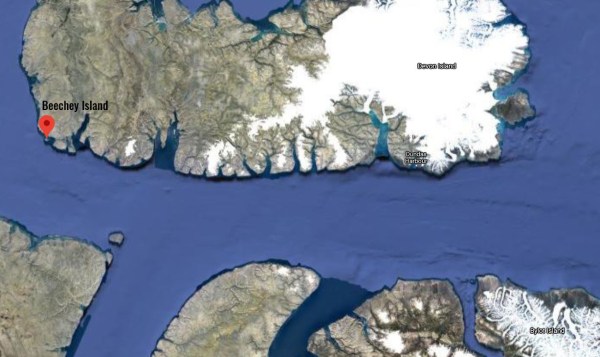 On the stretching shoreline of Beechey Island they discovered three graves left by Franklin’s Expedition. The three gravestones and buried sailors would become key to understanding the mystery of the lost expedition. And the remanents of a storehouse was left.

The gravestones would state that the ships had wintered here and after testing the buried sailors we realized that they were slowing being poisoned by their lead food containers. This doomed mission lives large in the story of the Northwest Passage and these relics stand to this day and can be visited by history enthusiasts and Arctic travellers. 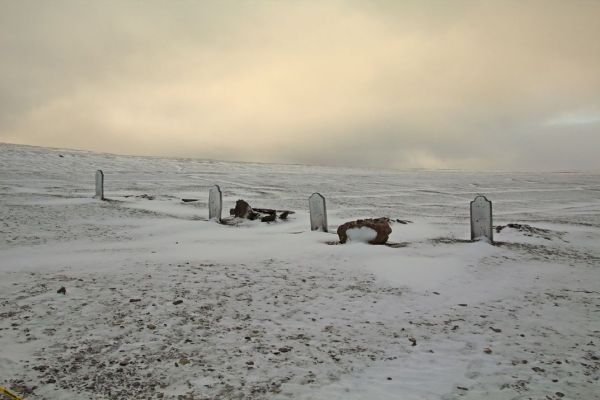 Most of the year it is covered with ice, but this channel between Melville Peninsula and Baffin Island is the other Northwest Passage entrance. However, turbulent water and constantly moving ice floes make this channel less ideal as a passageway for travel. 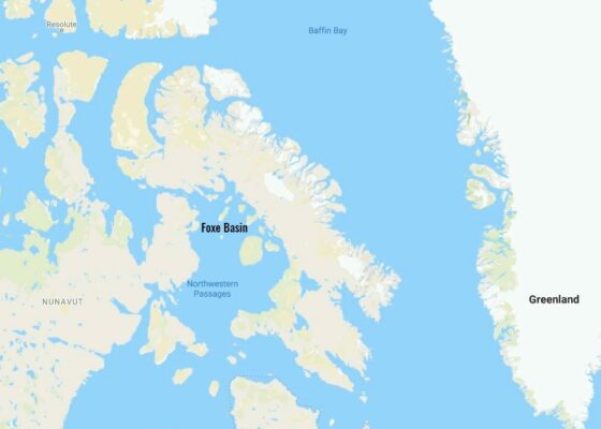 But this just makes it a remarkable wildlife haven! Foxe Basin is home to the largest herd of walrus in Canada. Other animals you can find are polar bears, ringed and harp seals. 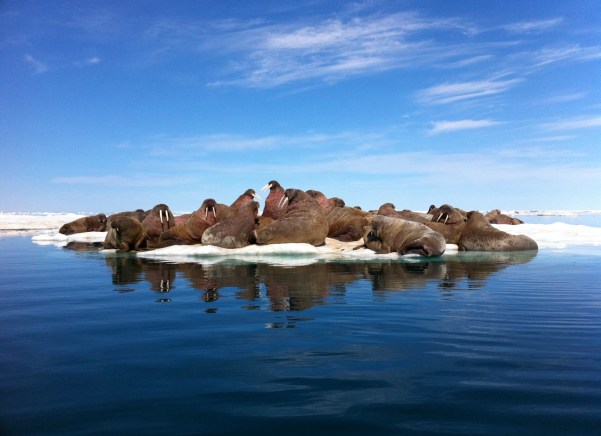 This basin becomes a major summering area for Arctic whales like narwhal, beluga and bowhead whales. They return to shallow bays and estuaries for a season of feeding on Arctic char and calving.

The world’s largest goose nesting colony is found within the Great Plain of the Koukdjuak, a marshy area where Baffin Island meets the Foxe Basin. This protected region comes to life with all kinds of beautiful birds like eiders, snow geese, arctic terns, oldsquaw, and thick-billed murres. 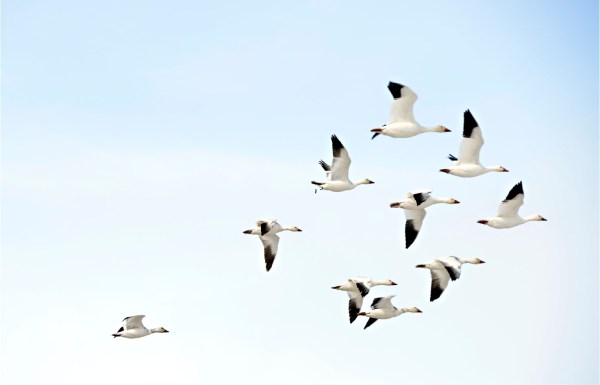 Did you know that early explorer Martin Frobisher once believed this was the true Northwest Passage and named it Frobisher Strait? Since then we’ve travelled further than he did and have come to realize that it isn’t a passageway but ends near Iqaluit. We can forgive his early assumption since he was held back by ice and the technology of the 1500’s but Frobisher Strait has become Frobisher Bay. 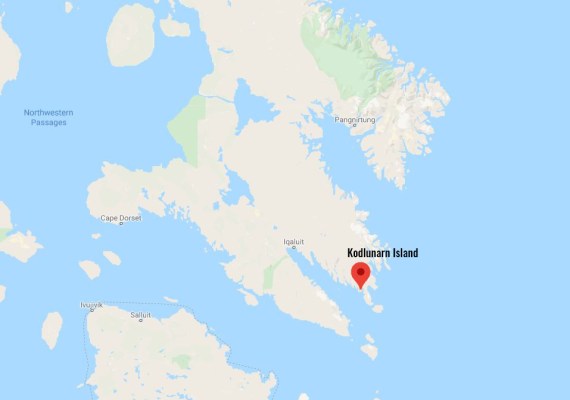 The colony wouldn’t last a year but you can visit Kodlunarn National Historic Site and see the ruins of a colony Queen Elizabeth took enormous interest in as England’s first attempted Colony in the Americas. 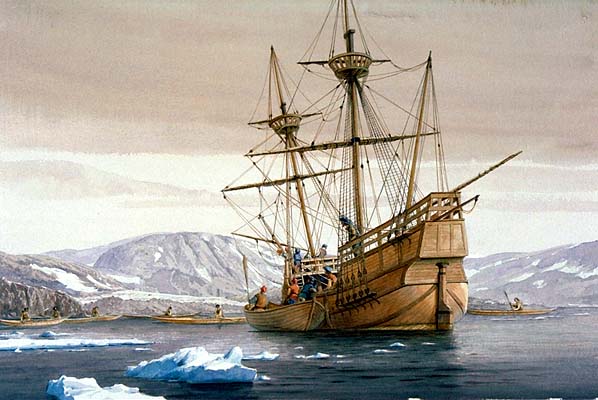 Enjoy a customized itinerary to fit your group’s interests and highlights. Go with family and friends to the destinations you dream of seeing and the animals you hope to photograph. We allow you to pick the sites, we then make your bucket-list trip happen. 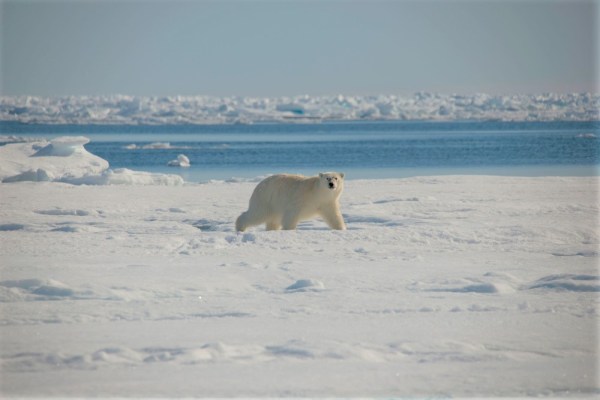 Travel in small groups to have space to explore and always room to photograph. Large groups like cruises tell you where to go and when as you shuffle through sites. The Arctic is meant to be explored with freedom and excitement! 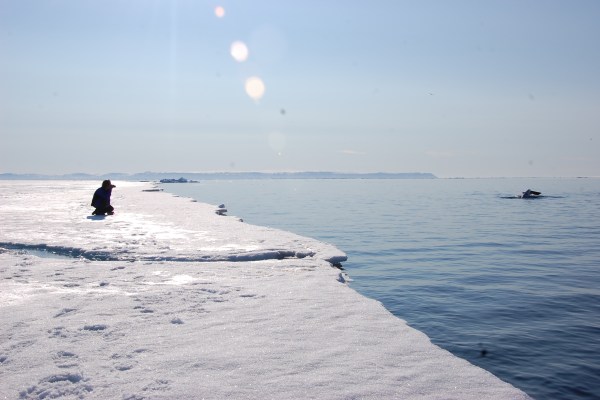 Travel to locations like Eclipse Sound’s floe edge where our land-based trips allow you to get unparalleled access to the famously elusive narwhal. The sounds of motors in the water can prevent seeing them on boat tours but by standing on top of the frozen sea ice, you can see them swim right past or socialize in front of you.

With 20 years of experience providing programmed and customizable Arctic adventures, Arctic Kingdom has the resources and expert staff to provide a trip you’ll never forget!

Get chances to view elusive Arctic wildlife and experience the majesty of the Arctic on safaris year around. View all Arctic Safaris here. 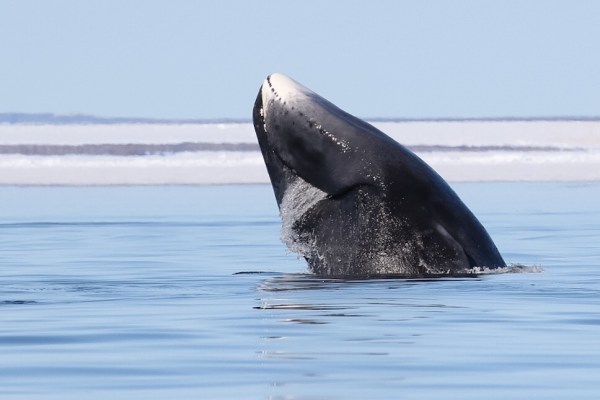 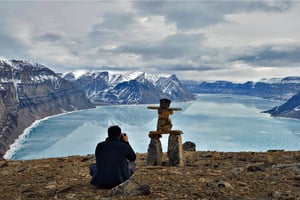 A Gift for Those Who Want Experiences Instead of Things

It’s starting to look like Christmas, and most of us are making sure we have the perfect gifts to...

There is an island in Canada’s north that blooms with life under the Midnight Sun. It’s the route... 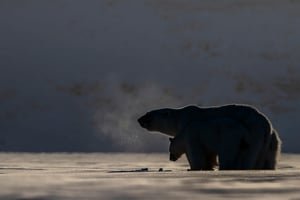 Polar Bears in their Arctic Realm

How do you make the world’s largest carnivore seem small? You find a place where dark granite...