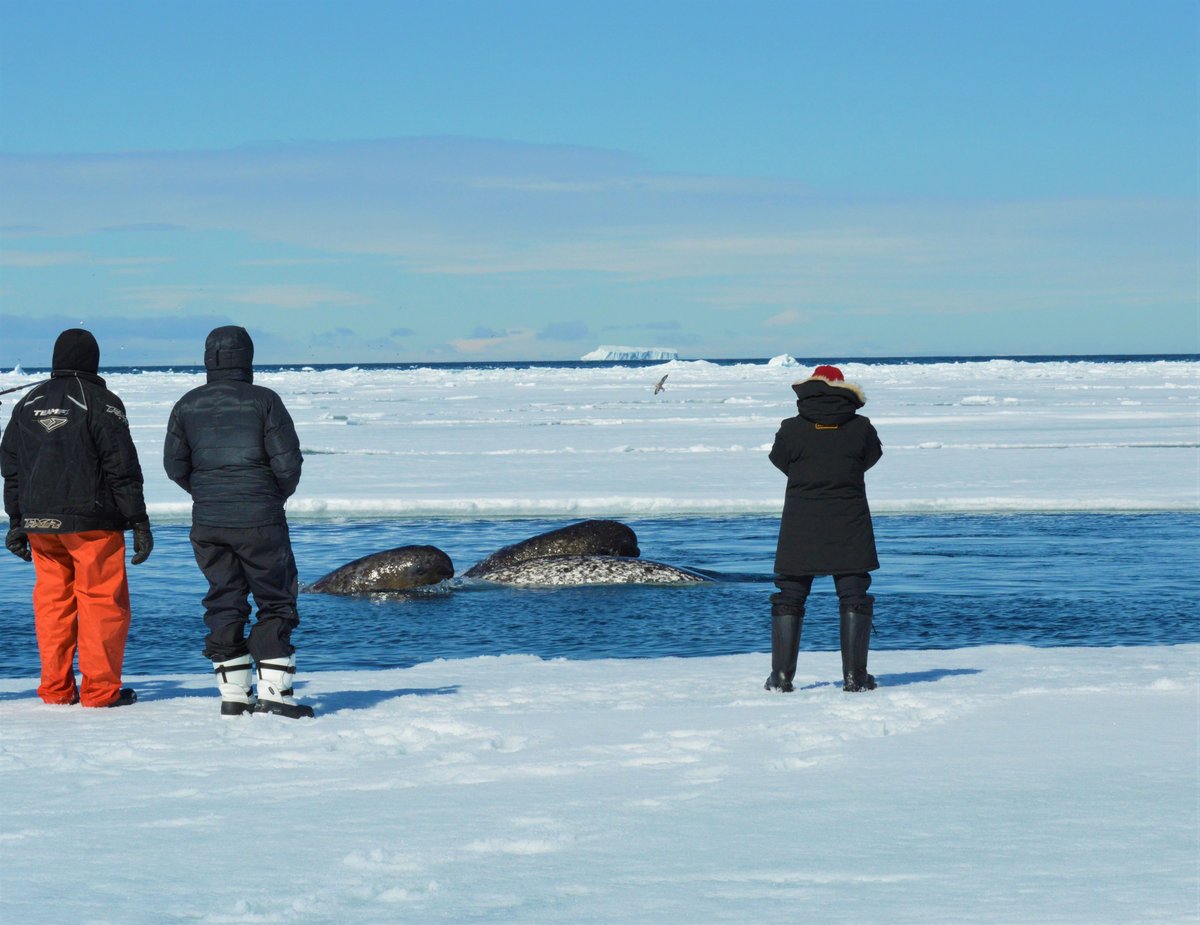 Whales of the Canadian Arctic

As a Canadian, the question you hear most when you travel abroad focuses on how cold it can be here. Questions like, “isn’t it freezing there?” Or, “how do you manage all that snow?”

They aren’t entirely wrong, but I assure them that the spring and summer are quite nice, and it can get just as warm here as in most places. It is the same with the Arctic; whales that live in the northern waters have a harsh winter but a rather lovely summer.

Three whales overcome dramatic seasonal shifts in order to live in the Arctic. They have adapted to this habitat, and their most defining feature is often their secret weapon to survive. 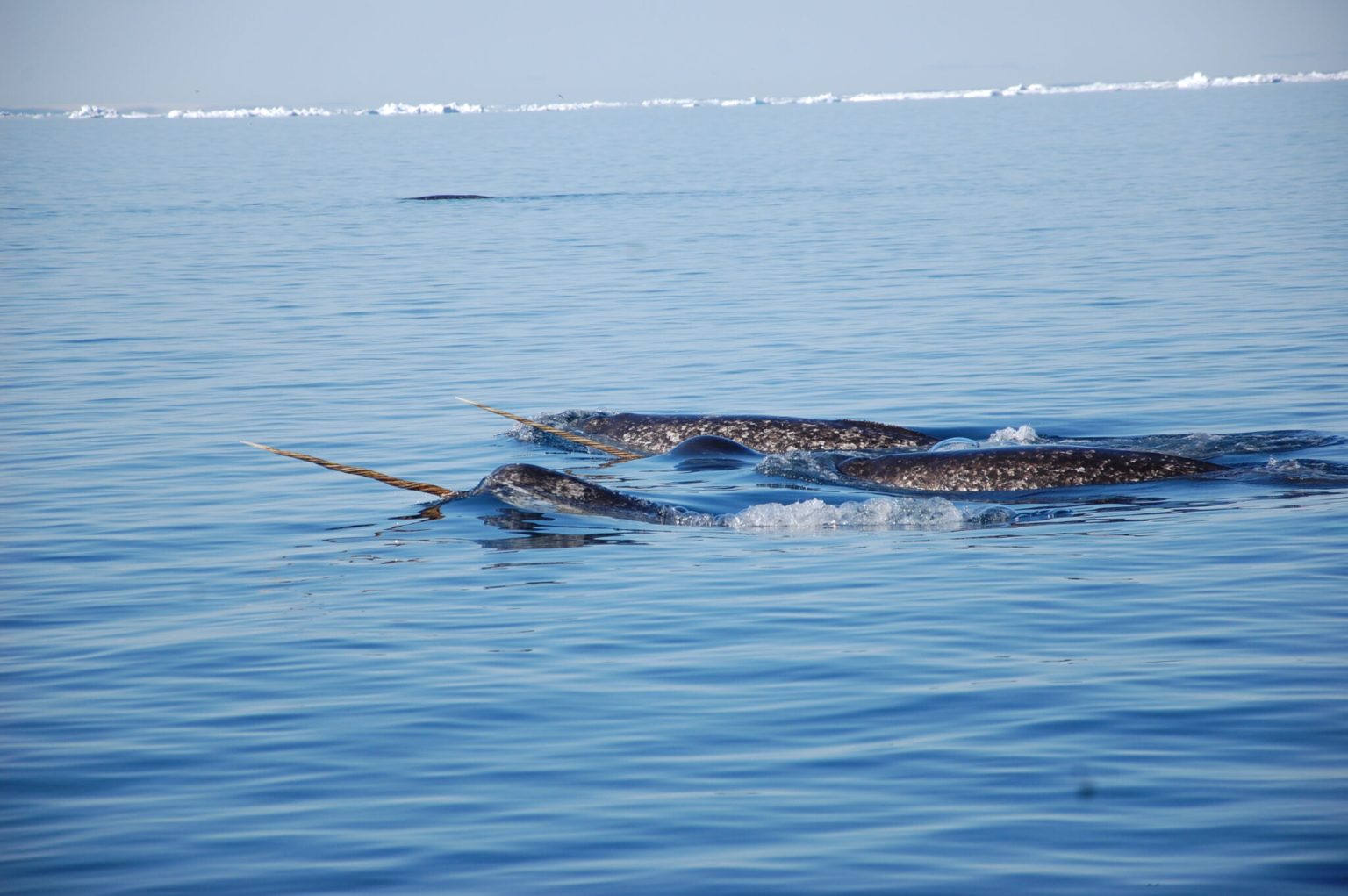 When people think of the narwhal, they are instantly drawn to images of their impressive tusk. But this canine tooth is not believed to be a defensive tool but a way to navigate a habitat full of ice.

This tusk has roughly 10 million nerves exposed to the water and travels directly to the whale’s brain. It is believed that these exposed nerves provide them with vital information for navigating the narrow channels to find an opening in the ice – such as noticing changes in the oxygen and salt levels of the water.

As much as 90% of the world’s population lives in the Canadian Arctic. Most of them divide their year between the mostly frozen deep seas between Baffin Island or Ellesmere Island and Greenland. As the sea ice begins to recede, they start their annual migration in the shallow bays and estuaries of the Canadian Arctic archipelagos.

These northern islands provide sheltered water for their young calves to mature and a fantastic place to find their favourite food – Arctic cod.

They will spend the summers feeding, socializing, and moulting off their rough and dirty dead skin. This moulting is crucial to getting rid of algae and other blotches built-up over a winter spent in the deep seas. 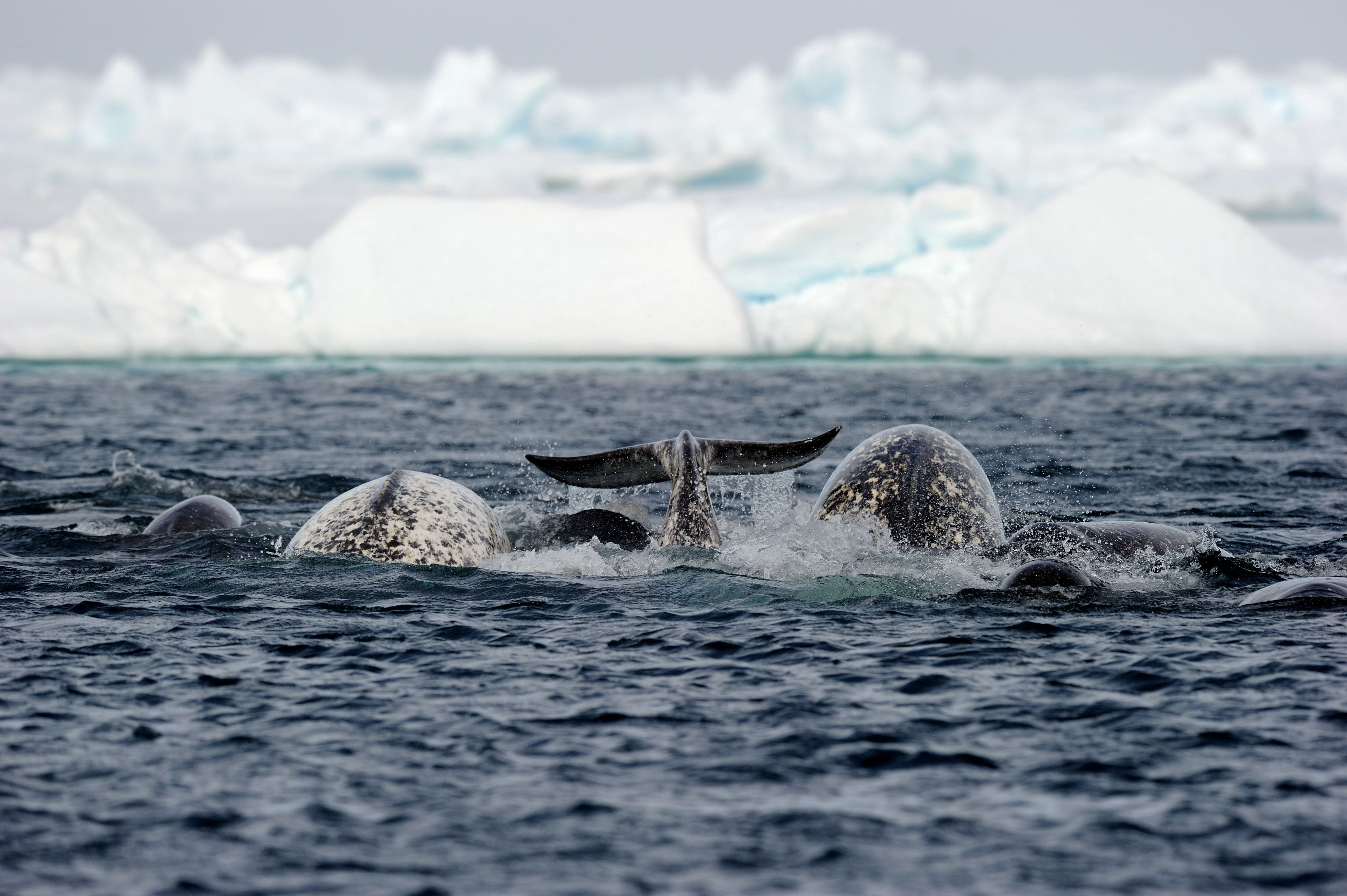 Their summer territories are a welcomed vacation from a world of ice and rough water, yet, this harsh habitat provides safety because few animals can survive here.

Their primary predator is the orca whale, and they are a vicious carnivore that is known for brilliant hunting techniques.

Narwhals do not have dorsal fins, which are the fin along their backs that are so recognizable on orcas. Not having this fin allows narwhals to hide below sea ice and can fit into smaller spaces that are out of reach for killer whales. This allows them to hide during the frozen seasons and reach the safety of shallow waters in the summer months.

This lack of a dorsal fin also allows them to hunt for their own prey, which feeds on crustaceans found on the bottom of the sea ice or floating directly underneath.

Another helpful adaptation that is unique to narwhals is that they can slow their heart rate. This is a vital part of living in their winter territories. There is limited food near the surface when the waters have frozen over, so narwhals are forced to dive deep into the cold waters to eat.

Narwhals can dive 1.5 km (4,900 ft) underwater and can hold their breath for 25 minutes in order to reach the fish below. The only way to survive in such cold water and to dive so deep they need to lower their heart rate so they don’t go into cardiac arrest.

That means that they are one of the only mammals that could survive in such a frosty habitat. Their specialized adaptations allow them to stay away from most predators and make the Arctic their home.

The beluga is known as “the canary of the sea.” They received this because of how vocal they are using clicks and chirps that can sound like birds. But their song is more than an endearing trait; it is a survival feature.

This whale that predominantly lives in Arctic waters uses these noises as echolocation. They can manipulate the size or shape of their bulbous foreheads, called melons, to create a remarkably wide range of sounds.

They will send out their whistles and burst calls, which can reach travel 1.6 km per second and are four times faster than the speed of sound through air, to bounce off things and return for the whale to interpret. They will learn the distance, size, shape, and more about objects that lie ahead.

This will help them detect predators or prey but, most often to find openings in the sea ice. While beluga whales are considered cousin species to narwhal, they do not have the same adaptations to life in the deep water.

They prefer to spend their winter among the fractured ice floes where they can find space to breathe or look for polynyas – openings in sea ice created by strong winds pushing ice aside or thermal ocean currents.

While belugas can also reduce their heart rate, but they do not dive as deep or as long as narwhals. This is part of the reason they remain in shallower waters throughout the year.

Beluga whales are famously social and are known to join pods of narwhal as they migrate. This allows them to rely on the narwhal’s ability to navigate the narrow cracks in the sea ice. They do not have dorsal fins, so they can remain close to the ice to evade predators but also to remain close to the frozen surface to find openings.

Another whale that belugas have been known to follow are bowheads. They share the valuable real estate of polynyas and benefit from the openings in the ice that these enormous whales can create.

This large whale is not just distinctive for being a giant that lives in the Arctic, but it is the only baleen species to make the frozen waters their permeant home. Roughly 90% of the world’s population lives in the Canadian Arctic all year.

They are closely associated with the north, and the distribution of early Inuit across the Arctic is believed to be caused by hunters following bowhead whales during a global warming period hundreds of years ago. Sea ice receding allowed bowhead whales to travel east, bringing hunters from Alaska to Greenland.

Their name came from their massive triangular skull, and were a particular target of whaling due to their size and docile attitude. 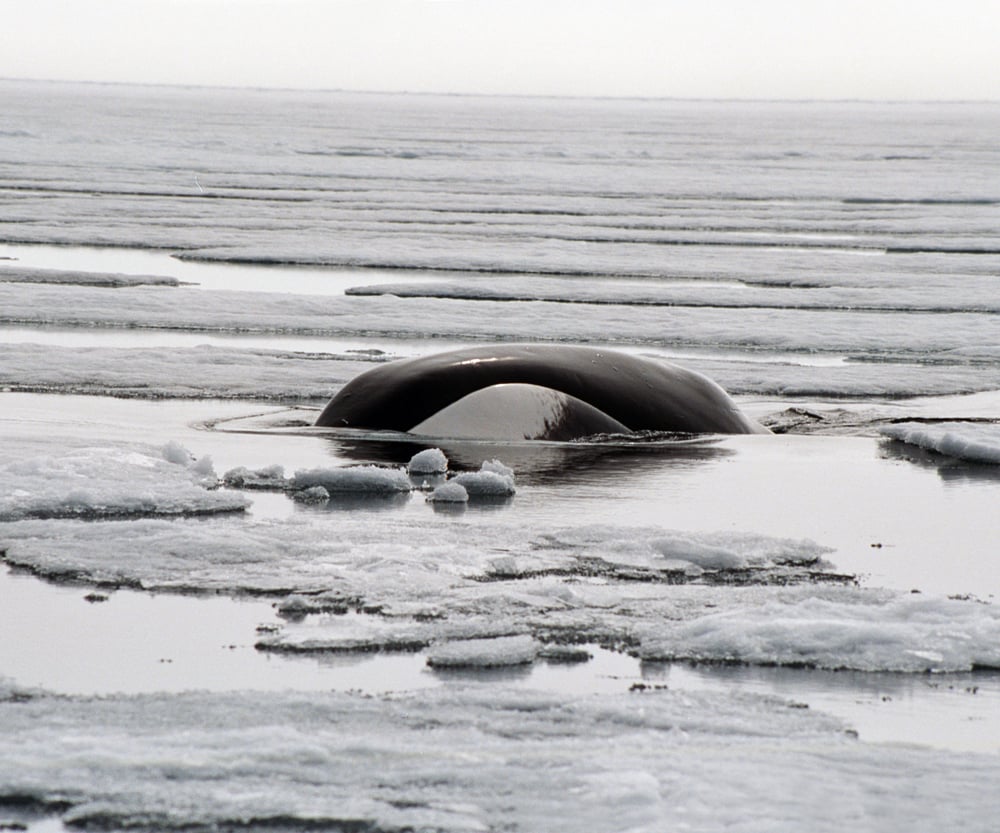 Yet, their enormous size is their most effective tool for surviving the icy waters of the Arctic. Their giant skull can break through ice to create breathing holes during the winter. Bowheads have been recorded breaking through 60 cm (24 in) of ice.

They are another whale that doesn’t have a dorsal fin allowing them to get closer to the surface among the sea ice. Their large mass helps them create space to breathe among fractured ice floes, and their blow hole allows them to breathe in tight spaces despite their large size. How You Can See Arctic Whales

These are some of the most exceptional and reclusive whales on the planet. This means a trip to the Canadian Arctic is the best way to see them in person.

While you might be able to find beluga whales at aquariums, narwhals have never survived in captivity, and bowhead whales are too large for most tanks. Not to mention how special about seeing wildlife in their natural habitats.

Visiting the Arctic is easier than you may think, and Arctic Kingdom makes it even better. Our friendly and dedicated team will make sure travel is simple and comfortable by doing all the hard work for you.

Our expert guides provide intimate knowledge that allows for spectacular whale tours and the chance to see these elusive mammals. A team of gourmet chefs create warm and mouth-watering meals for you to enjoy throughout the day.

If you are interested in an Arctic whale tour you’ll never forget, explore our Arctic tours by clicking here. How You Can See Polar Bear Cubs In Their Habitat

There are few experiences on Earth that can match seeing newborn polar bear cubs playing in the... 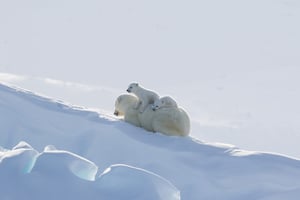 One of the most exciting times of the year in the Arctic is when polar bear cubs start to come out... 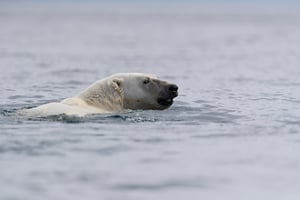 Why Polar Bears Love To Swim

With summer quickly approaching many of us are getting excited to do some swimming. A dip in the...